A Word From The Rabbi 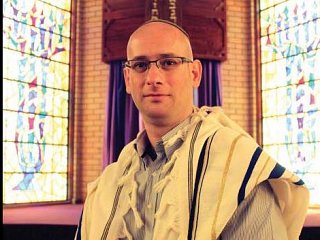 Shalom and Welcome to the Temple David Congregation Website! My name is Adi Cohen and I am proud to be the Rabbi of Temple David.

I was ordained as a Rabbi at the Jerusalem campus of Hebrew Union College and I am married to Gila, who is a special education teacher and social worker/chaplain. We have three beautiful children: Shaked, Yoav, and Tomer.

I previously worked as a congregational Rabbi at Temple Sinai in Wellington, New Zealand and Brit Olam Congregation in Kiriat Ono, Israel. As well as my congregational work, I have taught Law and Jewish Ethics at Metro West High School in Ra’anana, and worked as a story-teller in special ed. kindergartens in Kfar Saba. I have been also been involved with Jewish education initiatives in Israel and the Diaspora within the framework of the Jewish Agency and the Israeli Movement for Progressive Judaism.

I found my way to the Progressive Rabbinate world after recognising my own need, like that of many young Israelis, to reclaim my Jewish culture and religion, incorporating it as a significant part of my personal identity in day-to-day life.

I see the ‘Rabbi’ as both a religious and a social leader. As for my theological approach: in his book ‘Heart of Many Rooms’, Rabbi David Hartman defines three covenants between the people of Israel and their God: The covenant of worship – which is represented today by prayer and other rituals; the covenant of commandments – Jewish living – and the covenant of morality – acting in the spirit of the prophets. Most people define their Jewish identity by the most significant covenants in their lives. To these I add three more three elements, representing Jewish values. The first element is Humanism. That is, seeing every person, regardless of religion, race or sex, as a human being created in the image of God.

The second element is Liberalism. Each generation has its own interpretations and understandings of Judaism. As I see it, every Jewish person should deal with two complex questions: ‘What is my Jewish identity?’ and ‘In what way is Judaism relevant to my life?’ It is both a duty and a privilege to look back to the heritage of past generations, and from it to build an identity that is relevant to our era.

The third element is Pluralism. As no two faces are alike, people’s opinions are not alike. It is the acknowledgment that different people believe in different ways. An odd and wonderful thing in Judaism is the name we call God – Elohim. A name in Hebrew that is in the form of a plural, which completely contradicts the core of our Jewish belief: ‘Hear oh Israel the Lord is our God, the Lord is ONE’. There IS one God, but every person has his or her unique way of reaching Elohim.

I believe that the most challenging aspect of being a Rabbi is making Judaism and Jewish values relevant to the each generation, and offering them different ways to experience Jewish communal life that will enrich their Jewish identity. How do we do it? Very slowly and together! The first step is to understand the different needs of the congregants; the next step is translating their values and beliefs into actions – educational programmes, social actions, interfaith programmes and so on.

What makes a young Rabbi and his family want to leave a convenient life, a position in a community, and move to the end of the world? My wife and I met in a Jewish Agency seminar. Working with Jewish communities around the world, and particularly keeping young people engaged in their Judaism was, and still is, a calling and a way of life for us.

As the Rabbi of the Temple David it is my aim to assist and lead the community to be a place where different people with different opinions and different conceptions see the congregation as their Jewish home, a source of knowledge and a spiritual sanctuary - ‘a place of many rooms’ (Sotah 7:12)